Maybe we should have taken McVeigh to the farm. 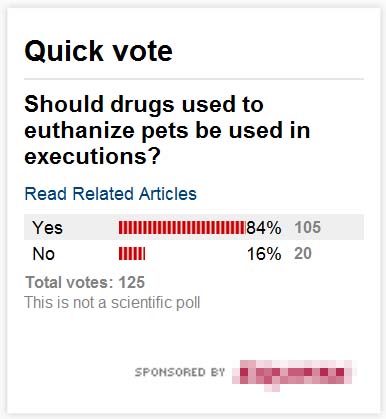 Really?  I mean, they're talking about
Pentobarbital, which is also used for physician assisted suicides, but the question at hand largely ignores that fact, and I highly doubt the 105 people that voted Yes knew that.  "Put 'em down like a dog", because, that's not hypocritical or anything.  I just imagine a bunch of Texans running around with hard-ons after reading about John David Duty being killed with the same stuff used to send fluffy off to the farm.

P.S. The more interesting part of the story is that the dude was spending 3 life sentences for rape, attempted murder and robbery.. He was executed for killing another inmate.

*EDIT* After time passed since I made the screen shot, the Yes has skewed even more upward.. a few thousand people and it's now 85% - 15%
Posted by Better Orange Than Dead at 9:21 PM