You know you're crazy when...

...the fucking KKK counter protests you.

They said they were there to object to the Westboro Baptist Church's anti-troop message.
"It's the soldier that fought and died and gave them that right to free speech," said Dennis LaBonte, the self-described "Imperial Wizard" of the KKK group that he said he formed several years ago.

"That's fine," said Abigail Phelps, the daughter of Westboro Baptist Church founder Fred Phelps. "They have no moral authority on anything.

"People like them say it's white power ... white supremacy," Phelps said. "The Bible doesn't say anywhere that it's an abomination to be born of a certain gender or race."

Wouldn't it be something to see a "moral authority" debate between KKK members and WBC members.

"We didn't want them to say we had sexually assaulted or raped them, so we wanted to prove that they weren't virgins in the first place," the general said. "None of them were (virgins)."

That is one of the worst things I have read in a very fucking long time.

~Nic
Posted by Better Orange Than Dead at 9:19 PM No comments:

Since I've been so posty lately.. 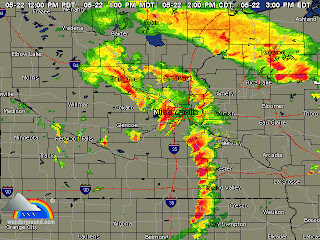 ~Nic
Posted by Better Orange Than Dead at 9:54 PM No comments:

~Nic
Posted by Better Orange Than Dead at 8:10 PM No comments:

If I lived about 8 blocks south... 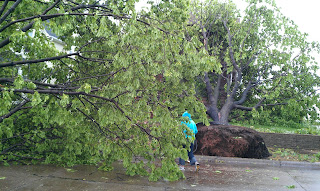 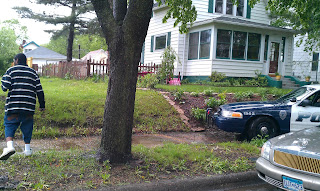 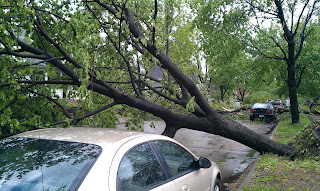 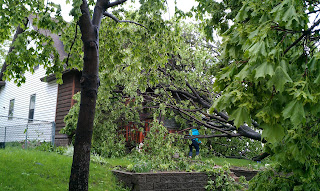 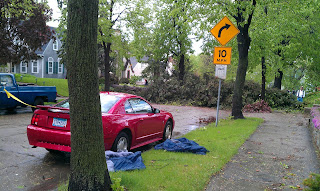 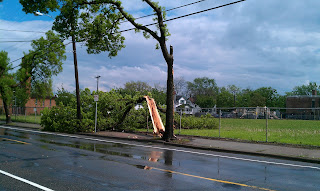 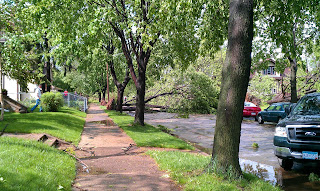 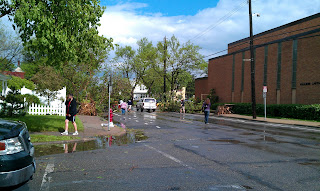 North Minneapolis around 43rd N and Emerson And no, I wasn't driving around there.  The aerial photos are insane.. I'm waiting to see if the city calls for any help, I'll jockey a chainsaw.
~Nic
Posted by Better Orange Than Dead at 4:40 PM 1 comment:

~Nic
Posted by Better Orange Than Dead at 11:30 PM No comments:

After driving around the west metro watching crazy awesome clouds swirl and twist, I returned home to learn that apparently they are going to vote on the constitutional amendment to go up for a statewide G.E. vote.  If you catch this post in the next few hours/minutes you can watch here: http://www.startribune.com/politics/statelocal/105629598.html

Really: Who fucking cares if two men, two women, three women, five men and two women, whatever get married?  These "conservatives", so full of hate.  The problem is that no one really calls them on it.  As the Balloon Juicers would say "The shape of the earth: views differ"; too many of us passively allow "views" to propagate unchecked (yes, you have a right to have an opinion, and I have a right to disagree with you as well.. and a right to tell you when you're completely fucking wrong.) that are irrelevant, and have no place in rational, or civil discourse.

This shit breaks my heart.  This is like the 4th post or so in a little over a week on this.  I'm not pro gay, or anti gay, or pro marriage, or anything like that.  I'm simply pro human, and pro freedom.  I wish some of my states' elected representatives could honestly say the same, despite their insistence that they are.

~Nic
Posted by Better Orange Than Dead at 10:16 PM No comments:

So  Captain Jackass who we all remember has worked with Minnesota Republicans in the past, is invited to make the opening prayer (whyever the fuck we still have this is beyond me).  He insists, indirectly that Obama isn't a Christian (because when you're everything-that's-not-you-phobic, that's a bad thing), and people figure out who he is.. everyone loses their shit.  The whole incident actually showed a thread of hope, not just for the delay and possible shelving of an anti-human power grab, but for the people in that chamber.. they were basically shamed into renouncing a man they may very well secretly adore.. after all, someone must have invited him.. or maybe he raptured in, or some hogwash.

The point is: If you bring someone somewhere who's a fucking bigot,   expect them to be a bigot, and don't be surprised when everyone gets all pissed off.  Who said republican idiocy was all bad?

~Nic
Posted by Better Orange Than Dead at 10:58 AM No comments:

From the front lines of insanity,
~Nic
Posted by Better Orange Than Dead at 12:45 AM No comments:

I find an incredible amount of similarities between those four things, the CDC had a secretly serious message, disguised as a joke for us: Zombies are already here.  So while you sit there and wonder: are there really zombies (or will I be raptured on Saturday)? I'll sit back and watch as the other three eat our collective brains.  Slowly.  As they have been doing, and will continue to do. 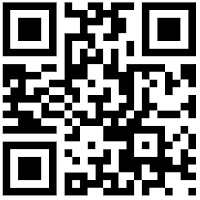 ~Nic
Posted by Better Orange Than Dead at 8:15 PM No comments:

You can stop asking me

Here's a hypothetical conversation with an imaginary reader

Reader "But what if you're wrong"
Me "about what?"
Reader "Judgement day"
Me "Well, what if I am wrong about there not being a colony of smurfs on the sun?"
Reader "That's ridiculous"
Me "."

~Nic
Posted by Better Orange Than Dead at 10:45 PM No comments:

"Is it genuine bigotry to believe that a child needs a father and a mother?"

Yes in short.. and when you use what amounts to mobs to try enforce this legally, Yes.

"Is it mean-spirited to believe that the legal institution of marriage is far more about children's and society's ultimate needs than it is about the emotions and desires of the wedded adults?"

No, that's just plain stupid.  And to make it worse, you know it.  The "one mother, one father" thing only makes sense if you subscribe to a host of other utterly nonsensical bullshit.  Let me ask this in my own snarky bigoted way:

If having a mother and a father is the only way a child should be raised, why aren't we making an amendment to take children away from single parents, to make divorce illegal, and require a license to breed?  Oh right, because no one would fucking put up with that bullshit.  The argument is old already, but I will regurgitate it: If we put other civil rights up for votes, they would lose.  And the big one: If we had a constitutional amendment vote on banning "protests at military funerals" it would probably pass.  We live in a representative democracy to PROTECT the minority from the tyranny of the majority.  The minority is never really a tyrant, it's just that the majority is a bunch of babies.

I get it: you don't like LGBT people.  It's not really cool to say it anymore, but you can still try to at least keep them down.  It's a good thing that people still die -- after a long life of course -- otherwise, ideas would never get a chance to progress.

Remember when you're out there screaming your hate for this ungodly thing, or that unchristian whatever:

We look about us, on the streets and in the subways, and discover that we are beautiful because we are mortal, priceless because we are so rare in the universe and so fleeting. Whatever we are, whatever we make of ourselves, is all we will ever have--and that, in its profound simplicity, is the meaning of life.

~Nic
Posted by Better Orange Than Dead at 5:04 PM No comments:

By the time I get to writing anything, millions of people already have written far better things on the subjects I attack.  But this has never stopped me before, so:

Torture is a bad thing.

This isn't failsafe, but a good way to judge whether something is, generically "good" or "bad" is to do the would-I-want-that-shit-to-happen-to-me test.  Torture fails, and pretty much across the board.  The amount of good intelligence gathered from torturing someone is absolutely beside the point.  Again, we're asking the wrong fucking question.  Who cares if "torture led to Bin Laden"?  But to fall prey to another rhetorical seduction, I'll explore it a tiny bit.

Not all intel gathered from torture can be bad:
This fails the bullshit test.  If this is true, than SOME of the people tortured in the dark ages MUST have been flying around on brooms..  Or maybe it's that the only real use of torture is to force someone to admit something the torturer already knows (before these people were tortured into "admitting" whateverthefuck crazy shit they were admitting, the torturer had already decided they were guilty, and the 'crime' was quite specific).  If the torturer doesn't know exactly what information is to be gathered, then there's no real way to detect lie vs. reality.  Quick example:

Joe Patriot: "Tell me where Usama is, or I'll smash your balls!"
Freedom Hater: "No, Never!"

Joe Patriot: "You're lying!  I know he can't be in Pennsylvania!"
Freedom Hater: "You're right, he's in the big house just outside of Khan Abu ar Rayat, near 'highway' 12 in Iraq!" (Randomly zoomed in on a spot with google maps).
Joe Patriot: "Thanks you piece of shit!"

Now, Mr. Hater has bought himself some time, and can easily work his way out of the lie (Doesn't matter if it's a lie, or if it's just completely random) with statements such as "He must have moved" (I mean, who could argue with that?  It's highly plausible that living things that are not plants would move).

Now if Mr. Patriot already KNOWS where Bin Laden is hiding, and already knows that Mr. Hater ALSO knows (heh), he can successfully torture him for that information, but this is completely stupid, and by any rational standard can be considered a fucking terrible thing to do.

The REAL purpose of torture is, has always been and will always be to exact some kind of personal revenge, or to pacify some kind of bloodlust.  Neither of these have a place in any modern society.  Plus: what's the point of making pro-human laws if you only arbitrarily follow them?  (This argument also does well with god-miracles vs. reality).

**Edit: the spaces in the dialog used less than and greater than < > but I forgot to use HTML elements (GOOGLE: FUCKING FIX THAT!) so they're gone, but use your torturous imagination.
Posted by Better Orange Than Dead at 11:54 PM No comments:

Obama at the Correspondents Dinner:

No one is happier, no one is prouder to put this birth certificate matter to rest than "the Donald"  and that's because he can finally get back to focusing on the issues that matter, like did we fake the moon landing, what really happened in Roswell, and where are Biggy and Tupac?

Seth Meyers at the Correspondents Dinner:

Donald Trump often talks about running as a Republican, which is surprising, I just assumed he was running as a joke.

P.S. The title is stolen from a Futurama episode specifically.
Posted by Better Orange Than Dead at 10:56 AM No comments: