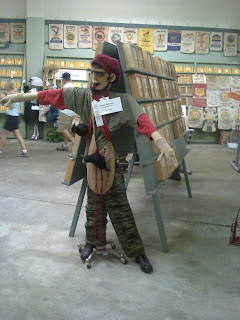 I don't really enjoy the fair, for the most part. Sure there's plenty to look at, and sure there's fun stuff to see.. but I've seen most of it all before. Sometimes though, something catches my eye. This caught my eye. The image was taken with my cell phone, so it's not the best one would hope for, but you get the idea. This can be read a few different ways... I will leave that up to you. I will point out that it is a scarecrow (duh), and there are "crows" on it. The eyes are thread-in type fuses. I think it's genius, and was my favorite thing at the fair this year.

While going through countless (well, over 5,000) text files of things I have written, found interesting, quoted, etc (I go through a chunk of the older stuff every once in a while) I came across this. It seems relevant to my post from yesterday. I am not sure if I wrote this, or if I found it somewhere, it had quotes around it. I googled it and found nothing, so I will take 1/2 credit, and if you find it elsewhere, let me know and I will concede all credit. The date was 8/24/2005 and the time was 12:32 AM on the file. (my personal archive goes back to 1993)

"In animal life, animals that travel in herds do so to save themselves with numbers. The animals that stray are easy targets for predators. With humanity, the consequences of straying from the crowd are worse, as instead of being killed and eaten by predators of a different species, they are cannibalized"

~Nic
Posted by Better Orange Than Dead at 9:07 PM No comments:

Freedom: Not just a feel-good refrain

It's supposed to be the thing that brings us together, as Americans.. the undying desire to find yourself free to say whatever you want, and the sometimes more poignant calling to stand up for things that you might happen to not like, not agree with or even hate. In my life, I've strived to support (whether in action, or just in thought) and stand behind the right for people to do, say and think things things I may not agree with.

It's been a terrible struggle from time to time.. one of my harder personal struggles was to come to terms with the implications of this; when I first learned of F. Phelps and his church. I abhor everything that is stood for by him, however in a fierce internal debate (Should I agree with those who want to ban him from his protests?), I decided that I fully support his right to protest the funerals of homosexuals. Not because it's the right thing to do, not because I think if we just leave him quietly alone he will go away, but because.. this is America, and freedom doesn't just mean freedom for things you agree with.

This fundamental, and admittedly difficult endeavor -- to support, above all, freedom of speech/religion/press -- should be embraced by everyone. There will be times in your life where you may be marginalized, but this freedom protects you. It protects you from the mob of fools who want to kill you because of, maybe even just an idea. Freedom isn't just about protecting the 99%, it's also about protecting the 1% from the 99%. You may note that this isn't really a democracy, it's a representative republic. And thank GOD.

That said, I entirely support the "ground zero" mosque. There are other reasons besides the above; most importantly, just as Christians are not, in general, murderers, nor are Muslims, in general, terrorists (or even responsible for 9/11). Should we bar Catholics from building a church within some arbitrary number of blocks near the Alfred P. Murrah Federal Building?

As a bit of a side note, I find it interesting that a whole bunch of people on faux news don't "agree with Obama" supporting the right of the outfit to build thier mosque at "Ground Zero". Thier reason? ""
-- About sensitivity? Are they coming around then? Does that mean they now understand why a good chunk of the country (and specifically African Americans) is offended by the Confederate Flag? You don't have to be politically correct, but it's a good idea to generally not be a fucking asshole to people you don't know, eh?

~Nic
Posted by Better Orange Than Dead at 6:20 PM 1 comment: