The Target workers in New York who voted yesterday to organize rejected unionization. No real surprise there, I've heard reports of mandated new-hire anti-union videos.  No surprise then:

The United and Commercial Workers Union Local 1500 says it's contesting the results and asking the federal government to order a new election. The union says Target management illegally threatened and intimidated the workers.

This doesn't surprise me.  Target can easily deny this, and no doubt they will.  But we all know, their biggest fear, in the whole wide world, is paying their people "on the ground" a wage that can support at least a family of three.  I boycotted Target with the whole Emmer/PAC thing, and I will continue to (besides the cookies I bought for my class Thursday night at Target with the store's money.  I know I know).  But maybe all those made in China stickers will one day not make me think of 10 year olds at sewing machines slaving away for $5 a day or something. 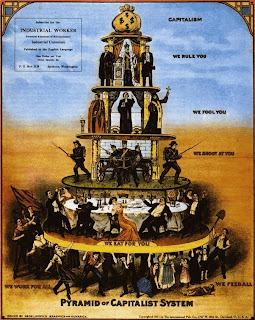 To keep the theme (and ignore nuance) from Orwell's Animal Farm:


"Mollie," she said, "I have something very serious to say to
you. This morning I saw you looking over the hedge that
divides Animal Farm from Foxwood. One of Mr. Pilkington's
men was standing on the other side of the hedge. And I was a
long way away, but I am almost certain I saw this; he was
talking to you and you were allowing him to stroke your
nose. What does that mean, Mollie?"

Posted by Better Orange Than Dead at 12:57 AM